Food grains in India achieved an all-time high production (310.74 mt) during 2020-21. Varietal and seed replacement rates played an important role in achieving this milestone. A total of 1646 varieties of food crops comprising 1273 of cereals and 373 of pulses were released from 2011 to 2022. Of these 977 varieties consisting of cereals (667) and pulses (310) have been inducted into the seed chain during 2020-21. New breeding technonologies such as bio-fortification of food crops and marker-assisted breeding were applied to improve crop varieties with respect to specific desirable traits. A total of 65 bio-fortified varieties comprising rice (8), wheat (28), maize (14), pearl millet (9), finger millet (3), little millet (1) and lentil (2) have been released with improved levels of proteins, essential amino acids (lysine, tryptophan), vitamins (pro-vitamin A) and micro/macro-nutrients (zinc, iron, calcium). Marker-assisted breeding adopting foreground and background selections with targeted gene(s) utilizing molecular markers such as RFLPs, SSRs, CAPs, STS and INDEL resulted in to the development and release of 66 cultivars comprising rice (43), wheat (5), maize (10), pearl millet (2) and chickpea (6) with one/and or combination of traits such as tolerance to biotic/abiotic stresses, herbicide tolerance, nutrient use efficiency, earliness, nutritional and other quality traits. These non-genetically modified crop varieties are expected to play vital role in achieving food and nutrition security in India. The paper also provides insight in to the maintenance breeding of food crops. The analysis of seed requirement and availability during 2010-11 to 2020-21 revealed that seed requirements for cereals and pulses have increased consistently by 31.6% and 62.3%, from 186.8 to 245.8 lakh q and 22.3 to 36.2 lakh q, respectively. The production of rice, wheat, maize, pearl millet and pulses during 2020-21 increased over that of 2010-11 by 27.4%, 26.0%, 45.2%, 4.4% and 41.3%, respectively. The productivity of sorghum was higher by 18.9% over that of 2010-11 but production decreased by 31.7% on account of a reduction in acreage by 42.5% during the corresponding period. The net per capita availability of food grains increased, by 17.2% from 159.5 kg to 187.0 kg during this period. The cereals and pulses production needs to be up-scaled by 5.3% and 24.4% to meet the demand by 2030 from 285.28 mt and 25.46 mt, respectively, in 2020-21, with almost the similar acreage, degrading and depleting natural resources, thus, requiring a greater focus on enhancing yield/ha. Crop-specific breeding programmes should be accelerated with the adoption of new technologies like GM, gene editing, marker-assisted selection and speed breeding to address the challenges of climate change and degrading natural sources.

This work is licensed under a Creative Commons Attribution-NonCommercial-NoDerivatives 4.0 International License.

Most read articles by the same author(s) 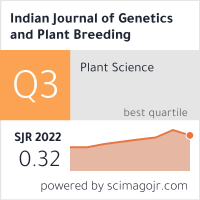